This is a writeup from the first capture the flag competition I participated in, the PoliCTF. The challenges ranged from web vulnerabilities, through crypto challenges to writing binary exploits. I really enjoyed the competition and I am looking forward to the next year.

This one is trivial, a server is listening for user input and responding with some hex-encoded data.

The flag can be extracted by xoring the user-provided string with the server response.

Hanoi as a service

Connecting to the provided address:

It runs Prolog, great. After a while of reading up on the syntax, I figured how to inject arbitrary code. So I tried the obvious:

It looks like the shell() and unix() functions were removed. After some more searching the documentation, I found that Prolog also has process_create(), which works:

I am not really sure if this is the intended solution or process_create was just overlooked but hey, it works :)

Crack me if you can

This one is an Android app. Unpacking the .apk and running strings on classes.dex yields:

It turns out that this flag is just a bait, so some further digging is needed. Disassembling the dalvik .dex using smali reveals three classes.

These are then composed in LoginActivity.smali

The next step is to extract the obfuscated string from resourses.arsc. The content can be guessed from the substitution functions being called, so strings+grep is enough to do the job.

Now I just implemented deobfuscator in Python and captured the flag.

The binary provided in this challenge expects input on stdout and returns “Wrong input.” unless the input matches the flag.

Opening the binary in radare2 reveals that the input string is fed into some verifying function which iterates over it, checking whether individual characters are lowercase letters and applying some mysterious transformation. It then does some checking to see, if the flag is correct. 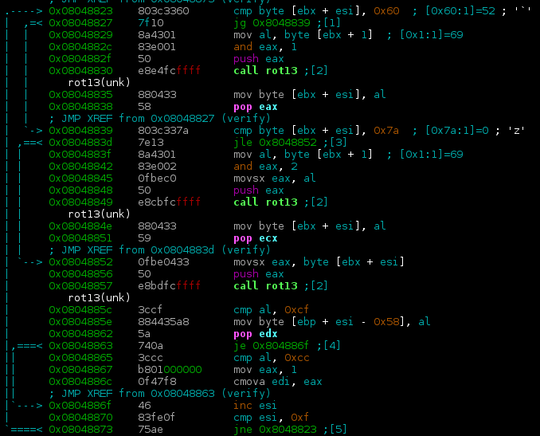 By testing various inputs, it turns out, that the transformation is just plain rot13.

The next stage then checks if differences between adjacent characters match some hard-coded values.

The flag string can therefore be easily reconstructed:

This outputs two possible values for the flag, both of which are correct.

In this challenge, the server accepts a .jar file containing implementation of the provided Cake class. It then prints the ingredients added in its addIngredientsToCake().

The objective is to submit a .jar file containing implementation of the provided abstract Cake class which sets the shouldBeAddedTheSpecialIngredient variable to true.

The .jars are first encoded by a simple algorithm from Decode.java. Rewritten to Python:

Just packing a .jar with the custom NewYorkCheeseCake.class and submiting it to the server is not enough though.

The server seems to require a signature. The challenge description heavily hints that the certificate chain is not actually verified, so signing the jar is just a matter of creating a certificate with field values identical to the one used to sign the original .jar. This is an easy jarsigner exercise, omitted for brevity.

This challenge required exploiting a binary running on a remote server.

Starting radare2 and looking at the add_element_to_library function, a buffer overflow can be immediately spotted in a gets() call. This allows an attacker to overwrite return value of the main function.

As there is no way to know address at which the shellcode is going to be placed, another pointer, further down the stack needs to be used. This pointer points slightly below the buffer, but after setting up the exploit in such a way that its least significant byte is overwritten with the string terminating \0 (this trick only works on little endian machines), it points somewhere inside the 1024 byte buffer about ~20% of the time.

This pointer is then loaded into %eip using a rop gadget:

And putting it all together into a python script:

This one was definitely the most fun. Connecting to the provided address:

Looking at the connection handling code:

So it sends a constant string and a password encrypted with 3DES. The key is generated by the following:

As cracking 3DES is not an option (yet), the vulnerability has to be in the key generation. The function seems to attempt to generate EDE2 key, but due to the way 3DES works, it generates only what is equivalent to normal DES. DES itself is attackable, but not on my hardware and not on time to finish before the competition ends.

Input into the process consists only of 5 bits per key byte. This means that the keyspace has at most 2⁴⁰ keys. Still a bit much.

So about half that. This means a keyspace of 2³², which should be searchable relatively quickly.

My first implementation in Python using PyCrypto had too much overhead and the total search time was about ~100 hours. After I rewrote the cracker in C, calling OpenSSL directly, the time it took to iterate over the entire keyspace decreased down to about 30 minutes.