Here are some of my first impressions about the new Orange Pi PC.

There is of course a ton of other usual miscellaneous peripherals, for details, check the manufacturer’s page.

Power through the Micro USB connector

Unlike the Raspberry Pi, Orange Pi PC (and the other boards probably too) cannot be powered through the on-board micro USB connector. This means that the board has to be powered either through a barrell jack connector or the pin header.

After some probing with multimeter and looking at schematics of one of the other boards, I figured out that this can be easily fixed by bridging the switch used for switching power to OTG devices.

There is not much mainline kernel and U-Boot support for the Allwinner H3 yet, so one has to use the somewhat archaic versions (3.4 for kernel, 2011.09 for U-Boot) provided by Allwinner in their SDK. This will hopefully improve eventually. There is an H3 patchset on LKML, but it has not been merged.

As my usual distro of choice is Gentoo, I decided to build an image for it. The process is well documented on the linux-sunxi wiki so I won’t bore you with the details. The build script can be found here. Note that these are basically pure stage3 tarballs, so they need some setting up, see the handbook. After booting, there should be a root console on the serial header.

This takes about 12 minutes which is about an order of magnitude longer when compared to my laptop (i5-3230M @ 2.60 GHz with SSD).

The power consumption is nothing unexpected. In idle, the board draws about 200mA.

the power consumption jumps up to about 450mA. 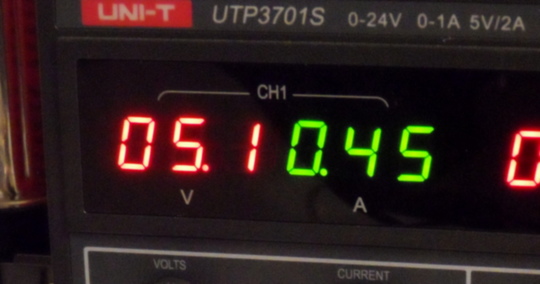 This is about the same as most other Linux boards.