We are given file encrypted by the following:

As the xor operation is associative – \((a \oplus b) \oplus c = a \oplus (b \oplus c)\), double xor is equivalent to single xor and so it can be solved in the same way. xortool is a very useful tool for finding the key length and then cracking the key.

(the plaintext is utf-8 encoded, so it needs to be manually decoded as some of the characters come out mangled in the xortool-produced result)

So, it turns out, that perl’s open() has this fascinating “feature” allowing for command injection in the string passed to the call.

Variadic function calls in C do not pass the number of parameters actually given to the function being called. This means that the callee has to derive it by some other means. In case of printf and the like it is by the amount of flags passed in the format string. An attacker in control of the string can then make printf to read data further down the stack which are not arguments. e. g. to dump the stack content:

The address of the secret variable is 0x804a02c, which corresponds to the sixth argument. Now we need to write to it. One of the printf flag characters is %n, which writes the amount of characters already printed into a pointer. This allows the attacker to write (well, almost) arbitrary values to any pointer on the stack. Using that, the exploit string looks like this.

RSA encryption is defined as

From this follows that:

By inspection, it can be seen, that if \(m\) is small, then \(k\) will also be small. Therefore it can easily be bruteforced:

In this problem, the target is a web service written in CoffeeScript

This one took me quite a long time… The point here is, that JS objects are not maps. In a standard map, one would not expect any keys to be there by default.

Therefore we can get the application to call an unexpected function like:

Notice that all is_admin checks are not strictly typed, so it does not matter what does the getter return as long as it evaluates to true.

This looks kind of bulletproof doesn’t it? Well, with some python trickery, the sandbox can be broken and the flag captured.

This is a reference to the famous Debian key generation bug. After enough keys are gathered, some of them are going to have at least one prime in common with the key with which the message was encrypted. If two numbers share a prime factor, it can be recovered easily using Euclid’s algorithm and then the other prime factor can be recovered just by division.

SQL Injection here. As there is no easy way to read the database directly, so I just opted to use sqlmap which can dump the database by using blind SQLI.

At first, this looked like the Håstad’s Broadcast Attack, but after implementing it in its vanilla form, it didn’t work. The hint seems to hint (hints in IceCTF are somewhat cryptic…) that motd.txt is longer than the public modulus. Remember, RSA can only encrypt \(m < n\).

What to do now? Let’s look at what Chinese Remainder Theorem gives us.

Given a system of equations of the form:

This is actually quite cool. Every individual RSA encryption loses some information, but when enough results are gathered, the plaintext can be quite elegantly recovered.

This video is highly reminiscent of the Webdriver Torso YouTube channel. First, let’s take a look at the words being said.

Concatenating first letter of each word forms webdriver. Now, overlaying each pair of rectangles with a crude python script leads to: 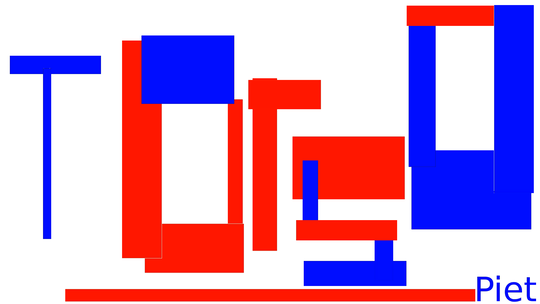 Nothing exactly surprising yet. There is an html comment on the page containing the video: 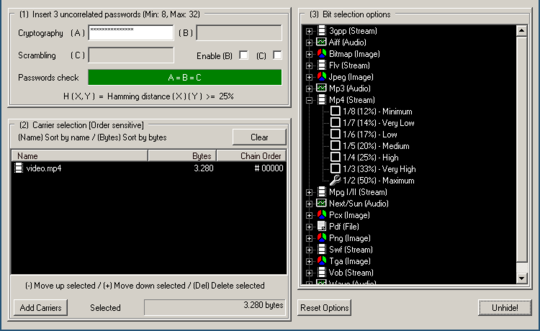 Which leads to OpenPuff, steganography software, sadly for Windows. Luckily though, it runs under Wine just fine. After setting it according to the comment and using the password webdriver torso, it spits out mondrian.bmp

This image is actually a program, “written” in an esoteric language called piet. After picking an interpreter and running the image, it printed the flag to stdout.

This time, there is no persistent XSS. However, there is a comment functionality and there is a “Report Abuse” button for each individual button.

The permalink button generates a link with URL fragment of the form:

Hm, so it seems that we can inject arbitrary fragment into the URL the admin opens. Let’s take a look at how the fragment is processed.

Because jQuery selector does not only select elements but is also able to create them, this code is vulnerable to DOM XSS. The exploit url then looks like:

This is a first binary exploitation challenge which does not have sources available.

So, let’s open radare2 and see what it does.

First, it takes the first two args and compares them to ausgeschnitzel and flugelfragen (I have no idea what these words mean and google translate is silent too).

What happens when AUTH is empty? 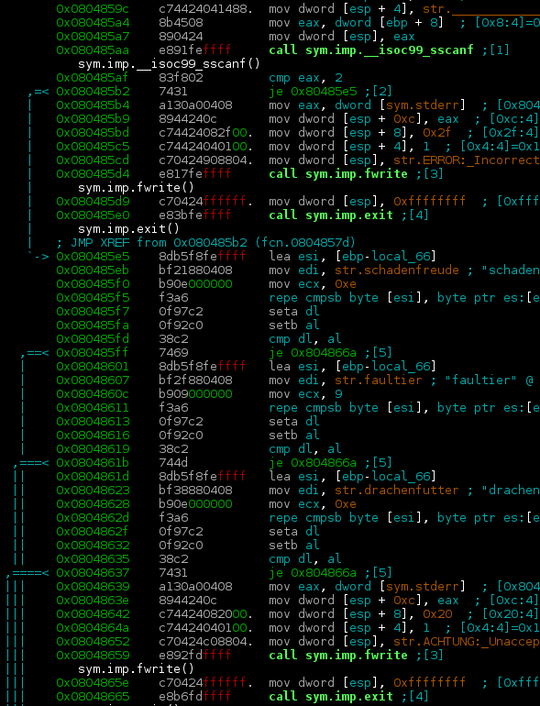 There is an obvious buffer overflow in both the variables containing WHO and WHY. As WHY has to contain one of the valid reason strings, otherwise exit() gets called, this leaves us with WHO to exploit. The tricky part here is, that the exploit cannot contain / (0x2f). This means that my favourite x86 shellcode cannot be used. Metasploit to the rescue!

Objective here is to get the application to unserialize new File("flag.txt") as it outputs its contents in its destructor if ?debug=1 is set.

The fact that using \(hash(secret + message)\) to sign messages instead of HMAC is bad idea is well known as it can be vulnerable to the Length extension attack which, given \(hash(secret + s_1), \space s_1\), can compute \(hash(secret + s_2)\) (the attacker has to know the length of secret, which in this case is 40 bytes, but it can be easily brute forced if unknown).

This week I learned…