After a long time of not-really-CTFing, I decided to a part in the Google CTF and exercise my somewhat rusty skills. This is a writeup of some of the challenges in the competition. I also wanted to play with Ghidra a bit, seeing as it is a new shiny reverse engineering tool.

The target is to convince the (locked) EEPROM to give up the flag.

Reversing the binary is not really all that useful, as the flag lives only on the remote instance. Quick look at the debug symbols reveals that it uses verilator for simulating the EEPROM and emu8051 for the 8051.

On connecting, the server responds with a challenge, requiring us to brute force an MD5 hash.

After providing the correct plaintext to the server, it proceeds execute the original firmware. Then it loads user-supplied binary and runs it with the now-locked EEPROM attached.

To make life easier, it is a good idea to patch the provided binary to avoid having to wait for the hash while developing. I just replaced the /dev/urandom string with /dev/zero using radare2 (Ghidra has executable patching broken at the moment).

Now we are ready to send custom firmware binaries to the remote server.

To produce a working binary for the 8051 we can use sdcc.

The EEPROM can store 256 bytes and has 4x64 byte pages that can be locked separately. Only the second page is locked by the main firmware after storing the flag there.

After looking through the source code, I figured out that the EEPROM uses something called repeated start condition. Usually, when communicating with an I²C device, we send separate “read” and “write” transactions. In our case, we have to “chain” writes and reads behind each other, without having an stop conditions in between.

Greater problem however is that the internal address pointer gets reset on a stop condition.

The microcontroller has an I²C peripheral to communicate. However, the maximum transaction length is only 8 bytes, which is not enough to attempt much against the EEPROM (as the address pointer gets reset). There is a GPIO peripheral connected to the same pins, which means we can bitbang the protocol to perform longer exchanges.

The plan is ultimately as follows:

Without the bitbanging fluff, the final annotated code looks like this.

In this challenge we get a EDK2 EFI firmware binary, running on a remote server inside qemu.

By default it immediately fails because secure boot is enabled and the kernel is not signed.

The goal is to exploit the binary in order to gain access to the BIOS configuration and disable secure boot. By wildly mashing all the keys on my keyboard, I managed to interrupt the boot process to get into a password prompt.

After some grepping through the mainline EDK2 source code of UiApp, I realized that this prompt has to be a custom modification.

At this point, I needed to start actually reversing the OVMF.fd binary. Opening it in UEFITool yields a ton of various modules. We are interested in exporting the one matching the printed UUID.

EFI binaries are pretty standard x86_64 PE executables and as such can be loaded into Ghidra without any issues. However, the lack of debug symbols makes reverse engineering challenging.

Because I suck at static analysis, I enabled debugging in qemu using the -gdb tcp:127.0.0.1:1234 switch and connected over GDB to the running machine. I also found out about the dump-guest-memory GDB script, which allows dumping of guest memory from a running qemu instance.

After more time than I would like to admit, I managed to figure out which function is responsible for the password prompt. Note that all the strings are wide, so running strings on the binary won’t be much of help.

Some relabeling later, the function looked as follows in the Ghidra decompiler. 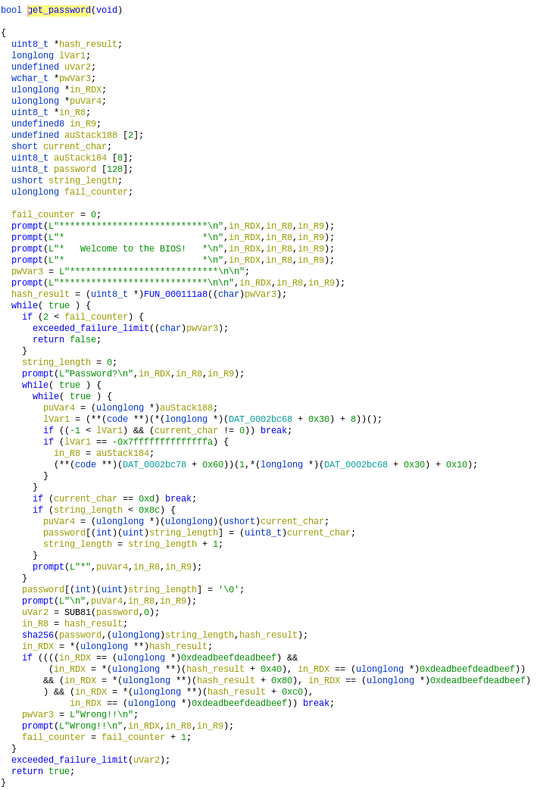 The sha256 function is easily identifiable by the magical constants.

Closer inspection reveals an interesting fact — the string buffer is only 128 bytes long, while the loop allows us to load up to 0x8c (140) bytes of data!

Given the stack layout, this means we have control over the fail_counter variable and, more importantly, over the pointer to which the result of the sha256 call gets written. The string_length variable is kept inside a register and as such is not a good target here. 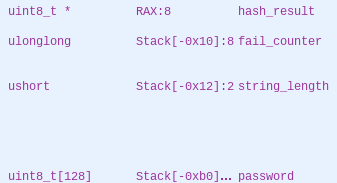 At this point we can control the address where the hash of our input gets written to. Brute forcing SHA256 is hard, so we have to minimize the number of bytes that matter to our exploit.

In the end I chose to overwrite the two lowest bytes (yay little endian!) of the return address stored on the stack with the address next to the branch instruction that checks return value of this function.

This is how the last few words of the string buffer look like. Notice the highlighted pointer which is where the SHA256 gets stored.

The highlighted value below is the modified return address. Notice that the data before is essentially random — that is our hash value.

Note that there is no ASLR and as such we do not need any address leaks to get the function address.

And putting everything together:

Afterwards, we get dropped into a pretty standard EFI configuration interface and can just disable the secure boot. The flag is then stored on the filesystem of the Linux that gets loaded.

This time we are given a binary to extract the flag from. Opening it in Ghidra shows that it connects over pulseaudio to a microphone and then does some signal processing, outputing either SUCCESS or FAILED depending on how much it likes what it hears.

Judging by the challenge name, it expects a sequence of DTMF symbols on its input.

As I did not want to bother with convincing pulseaudio to fake a microphone input, I wrote a quick LD_PRELOAD shim to bypass it entirely and read the input signal from a file.

At this point, we could just brute force the sequence character-by-character, checking how many samples are read from the input before failure. However, as I did not want to bother with generating DTMF signals, I opened the binary in Ghidra again and set out to figure out how it works.

The main function is pretty straightforward loop calling pa_simple_read and then two additional processing functions, one of which returns a fail/pass value.

It’s not really important how the signal processing is done (some SIMD magic anyway). More significant is the second half of the function. Here we evidently have a state machine that verifies the sequence. 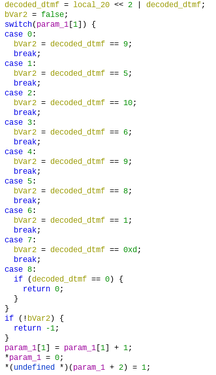 The decoded_dtmf = local_20 << 2 | decoded_dtmf line is pretty interesting here. Looking at how DTMF is decoded, we notice that it uses a table of frequencies, two of which select a value.

After a bit of messing around in Audacity, I figured that the upper two bits of the sequence from the state machine select row and lower two bits select column. The flag (by the challenge description) was just CTF{SEQUENCE_OF_DIGITS}.

Here we have a sandboxed environment which executes arbitrary user commands. Users can submit requests which get executed wrapped in a bunch of namespace protection. Then the resulting files get downloaded back. stdout is also forwarded to the client.

The provided client can be used as follows:

The source code looks as follows.

Given this hash is SHA256, there is no way we can realistically crack it and thus we need to look for some another way in.

The server runs a periodic script, which rebuilds the admin binary from source code over and over. This is obviously our target.

First, I spent some time on attempting to exploit the semget locks themselves. Unfortunately the namespacing entirely prevents access to the shared locks from our process.

Then I noticed an interesting thing — there was not any nosuid protection on /tmp. This means I could do the following:

At this point, there is another problem — I can’t just swap the source code of the admin build job. The mount sandboxing prevents us from writing to its build directory even if we have the same UID.

After a lot of time attempting to get around the problem in many different ways, I stumbled at injector, which is a tool for hijacking execution of another process using ptrace.

Using it is pretty simple — we just build a .so library with a constructor attribute on a function and run a command like:

Then we can simply inject the following into the sleep command which runs before gcc, replacing the admin shell source code with our patched version.

To perform the injection, we also need to submit a job that watches for running processes and starts the injector right after the sleep binary gets executed.